Installation of Pexgol pipes for drainage in a vertical ground

Ferrexpo Poltava Mining required the installation of pipeline for mine dewatering to be installed vertically from the bottom of the quarry to its surface. The pipe needed to be resistant to cracks and be provided in long sections in order to avoid many joints.

The client decided to install Pexgol pipes with OD 315 mm (12”) with 30, 24 and 19 class in coils by 90 and 120 m each for most difficult areas where the pressure varied from 32 to 15 bars. At the end of the line Pexgol OD 280 mm (10”), class 10 pipes were used in straight sections of 11.8 m.
All the pipes were connected by electrofusion couplers. In the places with high pressure were also used reinforcements for a safe installation.

A Caterpillar D10T bulldozer and the 40 ton excavator was used for unwinding the coils on core. Then the pipe were dropped from the top by the bulldozer & excavator. All connections were made with the electrofusion couplers. In the most difficult areas were also used reinforcements and fixpoint bridges. 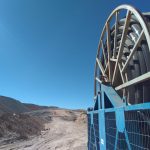 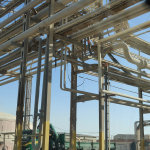